Nippy’s eyes spring open, and then he covers his mouth.

Joyous looks down at the gooey red stuff smothering his yeti fur coat—he wipes a hand across his forehead as a dark streak coagulates above the brow.

“What? This? Don’t worry. Calm down. Okay. Listen. Ummm. Right. Santa is dead. I killed him. Well…sort of. Okay, okay, I helped. Only a little. Well…a lot. I helped a lot. But I didn’t do the killin’. Well…” Joyous says.

A nearby wooden door bursts open.

“No, I did the killing, you just stood there like a useless snowman.”

“Well, shit…I thought we were friends, Winter? You don’t need to be harsh.”

Santa stumbles out of the office while a hand covers an erupting volcanic wound within his chest. A grimace holds back a groan imprisoned inside a white curly beard.

“Why are you doing this? There’s still time. We can talk. I’m sorry. Please. I take that back. You little mutants are going to burn. Do you hear me? Burn.”

“What’s the matter? Not in the holiday spirit?”

She whips her foot against his velvet  stomach, then Santa wobbles backwards into the office. Winter rests a finger upon her lips.

“Shhh…I’ll be right back, fellas.”

Winter slams the office door. Whelps and cries seep through the wood’s grain. Joyous and Nippy cover their mouth as the cacophony inside the office plays the tune of death. Pleas and apologies—the musical notes of a person’s demise as they deny an unstoppable fate.

They glance down a hallway lit by stings of colored bulbs, and then lock themselves in the office.

Winter sips from a mug as she her eyeballs scan a list.

“I think he can still hear you.”

Nippy huddles next to Joyous.

“What? Are you serious?”

“It’s not a big deal—this is a big deal.” Winter says while giving the list to Joyous.

Winter nudges Santa with her foot.

“Tomorrow is the big day! You know…when all the kids wake up and cherish our labor! Well…or at least a few hours, because, you know, a toy becomes boring after a few hours. Everyone knows that.”

“I say we feed Santa to that fucking blind polar bear, yeah, that’s right, you know he’s out there, and then, and then…and then…we burn the list! Yeah! We burn the list and then get the hell out of here. What do you say? Come on. I’ll grab his ankles, you grab his wrists…”

Joyous tosses his arms in the arm.

“Well…fuck me sideways! No, fuck us all! Listen: we got blood on our hands, got it? Not just anyone’s blood—Santa’s blood. They will find out.”

Someone knocks on the office door, and then the knob turns.

“Hello? Is everything okay?”

Winter places a finger upon her blue perched lips.

“Hello? Is anyone here? I thought I heard something, and it would have been wrong not to check, so…Santa? Is that you? Did someone…no…this can’t be happening…I can save you! Don’t worry! I’m skilled at treating sled wounds! You’ll be back on your feet before you know it!”

Winter kneels beside a desk, and then peeks around the ceramic mug. Joyous and Nippy crouch near a filing cabinet as the tall elf unwraps the scarf around his neck.

“Tell me where you’re hurt, go on, we have more than enough scarves to patch you up.”

Winter smothers her hand around the elf’s mouth, then jams the icicle somewhere inside him. Words can’t escape Winter’s grasp. He chokes on his own vowels and blood while his eyes widen like a mouth ready to scream. No noise. Silent and cold.

“I suppose a new management position will be open soon.” Nippy says.

“You can say that again! We couldn’t trust Flake—he would have ratted us out, then we would have been as good as Sasquatch shit.”

“I’m not taking any chances. We’re going to Santa’s cabin and will steal the real list. We’ll hide out in Festive Village, at least until the investigation blows over.”

Joyous points toward a nearby window.

“Do you still have sparkles in your brain? Come on, man, did you just hear what Winter suggested? She said that we should BUST into Santa’s cabin and STEAL the list…you know…ummm…the same cabin where Mrs. Claus lives! Did you also conveniently forget that the cabin rests on top Cold Cliff? Did you also forget that the only accessible trail is patrolled by abominable snowmen? You heard what happened to Fern! They turned him into a snowman…cruel bastards. Gives me the shivers.”

“Abominable snowmen are the least of your worries. What do you think is going to happen when Jack Frost hears about our little stunt? The evidence is all over the place. Look. You don’t even have gloves on. Your fingerprints will be lifted and guess who’s going to have to answer a few questions.”

A frosty wind rattles the window.

“Well…what about you! We weren’t the one’s who stuck that jolly pig.” Nippy says.

Winter places the red icicle on the edge of Santa’s desk, and then extends her hands toward Nippy—yeti skin gloves are wrapped around her fingers.

“The icicle is cold.”

“Are you serious? You’re just gonna fade away like a bad glass of eggnog, aren’t you? Expect everyone to just sip the situation until it’s all gone. Ha.” Nippy says.

“Don’t be silly! I have too much of a motive not to be questioned. Gloves won’t save me. Unfortunately.”

“Is someone in there? I heard a commotion…” 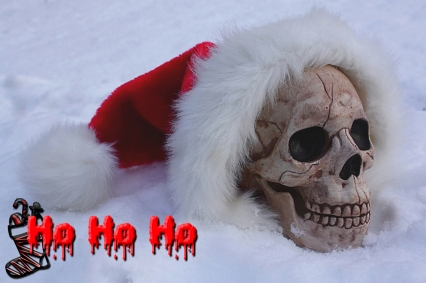 It's Okay To Scream! Cancel reply